In semi-arid and arid environments, clonal plants occasionally appear in ring patterns. There is a general agreement that this pattern forms when ramets grow radially, leaving a dead centre where the parent plant once was. Nevertheless, there is still some controversy over the actual causes of this dieback and how water source–sink relations in and around the rings are involved in their formation. We studied Asphodelus ramosus rings in two sites with different soil textures (sand and loess) but comparable climate, in order to understand whether differences in soil hydraulic properties create different water source–sink relations and mechanisms that drive ring formation. We characterised soil hydraulic properties and dynamics, accompanied by measurements of soil texture and of belowground storage root biomass. We found that the nature of source–sink relations varies with soil texture and properties. In sandy soils, water supply to ring perimeters is mainly from their centres. In loessial soils, water supply to ring perimeters is mainly from the surrounding matrix. Consequently, rings are larger in sandy soils than in loessial soils. This suggests that rings in both sites are formed by different mechanisms: fine particle deposition in the centres of ring in the sandy soil but competition over water in rings in the loessial soil. Studying the formation of rings and other vegetation spatial patterns should consider local soil properties and the possibility that similar patterns may emerge through various processes. 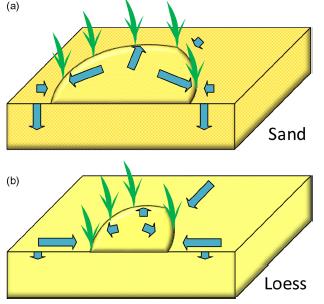 Differences in runoff and nutrient flows (blue arrows) in Asphodelus ramosus ring environments in both sites, as this study’s results suggest. a – In sandy Ramat Beka, runoff flows from the ring centre to its perimeter, but there is little or no runoff in the surrounding permeable matrix. b – In loessial Sayeret Shaked Park, runoff flows from the surrounding matrix to the ring’s perimeter, with the ring’s centre probably contributing relatively little runoff. 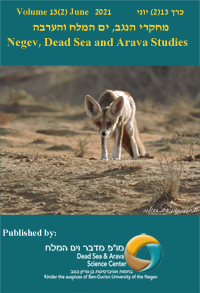